As a photographer, I am asked the same question time and time again by fellow travellers; “What settings shall I use?”

There is no true answer to this and I have found that the majority of those asking would like one of just a few answers – sport, landscape, portrait or night. My answers on the other hand are limited to M (manual) for confident photographers, or the more user-friendly settings  TV or SV (time or shutter speed variable) and AV (aperture variable) for those looking for an easy fix. These settings allow you to control the way light reacts to your camera without having to stare a hole in the user manual, and without having to rely on guess-work or risk losing the shot.

The focus of this article is on shutter speed – the TV setting, or SV on some brands of camera.

By choosing this setting you are telling your camera that you would like to control how long your shutter is open for to allow light to react with the digital sensors (or film) in your camera. Your camera will adjust all of the other settings to ensure correct exposure, giving you limitless creative freedom. What can you do with this? Many, many, wonderful things!

Your shutter speed controls the time it takes for the picture to be taken. Sometimes your camera is open for a fraction of a second during exposure, other times it can be open for minutes or hours. Everything that moves in your frame during your exposure will blur. The longer your camera is open for, the more opportunities there are for things to move. Your camera can also move during exposure, which is why pictures with longer exposures are generally shot on a tripod.

To reduce photography into a simple language, movement controls mood, and so your shutter speed controls the atmosphere of your image.

Action images capture drama. They show something frozen in time such as a lion mid-roar or an impala suspended in the air mid-leap. You could show an elephant splashing water with every drop clear and sharp. Shots like these are filled with excitement. They offer a single moment and very often show you something you would never have seen with the naked eye, like a swarm of bees or a fight between two giraffe.

To capture an action shot you need to have your camera open for as short a time as possible to stop any movement. As this is a fraction of a second you need to choose a TV or SV setting that is a small fraction such as 1/500 (a 500th of a second) or 1/250 (a 250th of a second). The higher the fraction number, the shorter the exposure, the sharper the image.

Romantic images are moody. They manipulate reality to make things seem endless, surreal, misty, atmospheric or ethereal. Romantic images use long shutter speeds to allow for things to move naturally during your exposure. It could be that grass sways in the wind, or stars move in the sky to create star trails. Perhaps there is a current in a river that can be blurred into mist, or lots of drops of water flowing over a waterfall can be blurred into a fast, strong fall.

With romantic images the possibilities are never-ending, however, it is important that you always include something sharp to show that the picture is not just out of focus. This can be a house shot against a million moving stars, or the rocks in your waterfall, or a steady tree in the windy grass.

Images like these use TV settings that are longer fractions of a second, like 1/15, or whole seconds which are shown on your camera using a ” symbol. The TV amount of 5″ for example indicates a 5 second exposure. Longer exposures allow for lots of light to enter your camera and work best in low light conditions such as dusk or dawn.

Most SLR cameras allow you to select up to 30″ for a 30 second exposure. This is great for twilight conditions, but not long enough to shoot the stars or play with light painting techniques. For images like these you need to use the shutter speed B. This is the bulb setting that allows you to keep the shutter open indefinitely using a trigger remote. 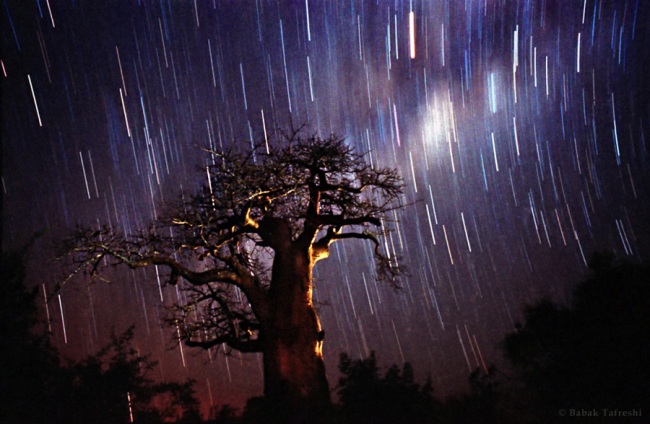 Star trails need anything from 30 seconds to 3 or 4 hours depending on how long you would like the trails to be. The longer the shutter is open for the more the earths’ rotation affects the position of the stars, creating white lines in your image. Light painting is intuitive and usually needs a torch to shine into areas of interest for 10 to 20 seconds.

If you are shooting on TV or SV, you are essentially using one of your cameras build in settings. It will automatically compensate the other settings to keep the exposure correct. For a practice project try shooting the same moving object in two key styles. In one shot, freeze the frame to stop the movement, in the other, use the movement to capture the mood.